Heard about the Tinwoo smartwatch, but are you confused if it is worth the price or is a reliable smartwatch? Read this in-depth review of the Eclipse W to find out.

It is extremely rare to find a budget smartwatch that actually provides good value and doesn’t miss out on the basic necessities. Surly enough that was the gap Tinwoo was trying to fill in with their Eclipse W smartwatch and for the most part, they did succeed. It is one of the few devices that does make sense on a budget.

It was certainly compelling enough to get my attention, and after a brief period of consideration, I decided to evaluate the watch extensively. After spending several days checking out each and every aspect of the device, I have decided to share my opinion about it. So, this is my review of the Tinwoo Eclipse W smartwatch.

To make this easier to understand I’ve divided the review into different sections exploring specific areas of the device. Also, I’ve tried to keep things short & to the point so, you shouldn’t get confused either. 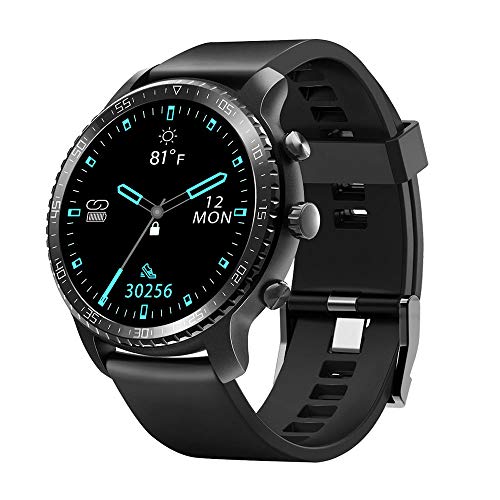 Tinwoo doesn’t have any OS restrictions and they support both Android smartphones and iPhones. However, minimum compatibility does require Android 5.0 or iOS 9.0 or newer versions. If you have a smartphone running older firmware, the Eclipse W ain’t gonna be compatible.

On the connectivity side of things, it has Bluetooth 4.2 and GPS. There is no Wi-Fi support which is the case for most of the devices around this price point. The GPS isn’t 100% accurate all the time but, it works fine and you’d need to sync the device with the smartphone app using Bluetooth.

The TINWOO app is kind of a mixed bag. It has a simple layout and doesn’t really look special. However, it does have the basic functionality to it. All the important health & fitness stats show up right on the app’s home screen and if you want you can also get stats starting from one day up to an entire year.

The TINWOO app is can be downloaded from the Google Play Store or the Apple App Store.

The display is one of the most common areas of compromise in budget smartwatches under $100 and the one on the Eclipse W isn’t really an exception. The 1.3-inch TFT LCD panel has a resolution of 240 x 240 which isn’t necessarily that high and resulting in less than ideal sharpness for visuals & texts.

Other than that, it is decent for the price with okay-ish color reproduction. The company has thrown in an always-on display, but because the panel isn’t OLED, it does drain a lot of battery. So, I’d not recommend using the always-on mode. You can however customize the look using 15 different Tinwoo watch faces.

The design does look good though with a circular shiny case and a nice-looking Silicone band. There are three buttons on the side and you can choose from five different case-band color combinations. The case is made out of Stainless Steel which is generally found on higher-priced devices.

The overall build quality is pretty good for the money and the device is comfortable to wear. The quality stainless steel used here isn’t gonna compete with the premium players but it does feel reasonably sturdy. It somehow managed to grab both 5 ATM & IP68 Ratings which is great for swimming or accidental spills.

The Eclipse W is using the Nordic 52832 SoC which is a super-baseline controller chip with Cortex M4. There is 64KB RAM with 512KB Flash Storage which clearly serves the purpose of powering the watch and nothing else. So, as it might be clear by now, this isn’t a smartwatch with great performance.

The device doesn’t necessarily feel fast but, it does the job. It indeed has a few hiccups occurring here & there and that is kinda expected. However, the software does a decent job to keep things optimized and make the device more than usable, and for the price, it is hard to complain.

As you may have already guessed, there aren’t a lot of sensors tucked inside so, the health & fitness tracking options are kinda limited. However, Tinwoo hasn’t skipped on the necessities. The device can do Heart Rate Monitoring, Sleep Tracking, Distance Tracking, Step Counting, and Calorie measurement.

There are 8 sports modes built into the software including ones for Walking, Running, Cycling, etc. You can just turn on the modes while starting the task and the watch will track the metrics accordingly. The tracking isn’t always super accurate but, it does the job most of the time.

The Eclipse W comes with a 300 mAh battery that can last around 10-15 days based on your usage habits and has a standby time of 20 days. That makes it one of the longest battery life smartwatches in its segment. So, if you keep the always-on display off, you can charge the device once, every two weeks.

It takes around two hours for a full charge and you can also use a Qi-based wireless charger to charge it up which is crazy at this price.

The Tinwoo Eclipse W is one of few smartwatches that manages to make sense on a super-tight budget. It is surprisingly well built, has most of the necessary health & fitness features onboard, and holds a single charge for almost two weeks. It is also one of the least expensive devices with a 5 ATM rating.

Yes, not everything about this watch is perfect and things like the display and the underperforming hardware are major letdowns. But, things like Wireless Charging and the availability of necessities make it one of the most compelling devices in its price segment.

So, if you are extremely limited on budget and you can survive with a smartwatch that provides the basics, looks good, but has a few compromises on the side as well, I have no problem recommending the Tinwoo Eclipse W.

Stephen is a 25-year old American living in the mesmerizing city of New York. He loves to go for long runs in the morning, and he enjoys biking just as much. Stephen is a huge Technology nerd, and he’s always tracking his health on his wrist. He owns one of the biggest smartwatch & smart band collections and keeps up-to-date with every single new piece of tech dropping in the world of wearables.